Is There An Election On?

Rather amazingly I have sold Daughter’s ‘spare’ Reading Festival ticket. I put it on Viagogo at midnight last night and it had gone by lunchtime this morning. Partly perhaps because I priced it just below all the other tickets on there. It was all far easier than I thought and it appears that we’re going to make a small profit on it. Perhaps I could change career and become a ‘ticket reseller’ or perhaps not.

Is there an election on? For once the hot talk in the barber shop is not concerning the hemlines and necklines of every female passing their window, as it usually is, or when it isn’t that it’s about the last customer to leave the shop. Your ears really do burn as you walk down the street after a trim.

Today though they are taking about the General Election for crikes sake. This isn't what I come here for, which was... well a haircut I suppose, but the banter is usually good and worth coming for, although more politically incorrect than you get practically anywhere these days. 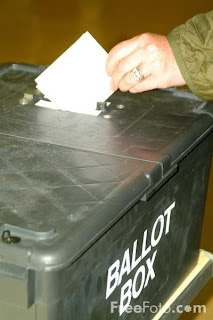 The big ethical question today is should one of the guys, who didn't intend to vote at all, cast his vote on behalf of his mother who has been detained out of the country. Well firstly, of course, I take him to task over not voting. Everyone should vote or else you have no right of complaint about who you end up getting. Even spoilt ballot papers count as votes, so at least go and draw a pretty face on it and get your vote counted.

His problem, as he sees it, is he doesn't approve of who she wants to vote for, not that he would have approved anyway unless it had been the Natural Law Party, who famously advocated using transcendental meditation and yogic flying to cure all the ills of society. Unfortunately they don’t seem to be standing this year.

Actually I think having to vote for his mother's choice frankly serves him right.

Meanwhile all the real politicians seem to be out on an all-night bender only without alcohol, doing a full 24 hours campaigning, chasing your vote. It’s kind of funny that happens on the same day an article comes out telling us sleeping for less than 6 hours a night can kill you. So bye bye guys.

I head to dog training, where the talk is also of rumours, untruths, back stabbing and behind the scenes deals. No, not election talk, we’re talking about teams for Crufts. Much more interesting and much more controversial.
Posted by FitForNothing at 4:00 PM