It’s Enough To Make You Want To Retire

I run in. 4.4 miles. It goes surprisingly well and my new shoes are growing on me. It’s also a change to rehearse the Delays, yep them again tonight.

Yesterday Mo Farah set a new British 10k road race record at the Bupa London 10k. 27 minutes and 44 seconds. Ouch. The world record by the way is 43 seconds under that and the track record even quicker at 26 minutes 17 seconds. It’s enough to make you want to retire.

I’ve inadvertently turned L into a sweaty mess, with the fitness programme I gave her that is. She achieved the target pace I set her on the treadmill and for 1.5k, which is over budget. I only told her to do 1k at that pace. Not sure if, as her personal trainer, I should reprimand her for that.

I also intend to give her a target for the bike. So I sent her off to find out what her usual ‘power rating’ was. The bikes give you this in watts, as well as your cadence and a resistance setting. It’s a combination of the latter two that influences your power rating.

She gives me two different ratings depending on whether she’s listening to ‘Popcorn’ (slower) or ‘Little Lion Man’ (faster). Clearly music selection is going to be the key here.

I have to rethink my strategy for running home as the Delays have announced, what turn out to be false, new stage times proclaiming they’ll be on stage at 8.45 rather than the usual 9.30. So I need to make it a fast run.

Thankfully the rain stops just before 5pm and I run the 3.3 miles to Spondon where I throw myself in front of a bus, just to stop it you understand, before hitching a lift on said bus to Bramcote. From here I run the 3.7 miles home. Amazingly I miss the rain again. The downpour arrived whilst I was safely undercover on the bus. Although I was that wet from sweat it probably didn’t matter (you probably didn’t wish to know that) and I could see the bus driver having palpitations about letting me on. I was expecting him to mutter something about Health and Safety and a no sweating rule but he didn't. He just gave me an evil look.

So that’s 11.4 miles today across three runs. Not bad and not far off the half marathon distance I’m doing at Buxton on Sunday, only I had a few breaks in between and there weren’t any hills. Although I did try and run hard up the few inclines there were to try pretend it was hilly. Don't think I fooled myself though.

We get down to the Bodega Social for 7.45, 45 minutes after the new door time of 7pm. Even this is a bit late if we want to secure a front row spot. Tonight we are ticket numbers 29 and 30 and traditionally we’re always 1 and 2 at the Social, so we’re expecting it to be busy. Who are all these interlopers? We have to be close. L’s aim isn't very good, so she doesn't want to have to throw her undergarments too far. Of course, she could just throw them at me rather than at Greg Gilbert. I’ll be the one stood next to her.

The doors to the Bodega Social are locked and there’s a mini queue of other folk who’d also heard about the new start time. Misinformation obviously and from an official source as well. We abort and head to Broadway for a pint, returning later.

Tonight’s support is Nottingham’s Amber Herd, last seen supporting That Petrol Emotion. I remember it well. They were a right mishmash of sounds as I recall but tonight they seem more sorted, more consistent in their music style. Probably because they appear to have dropped the keyboards tonight. Their new single ‘Red Gold’ sounds good to me as does a later track ‘Days Like These’ with singer Neil Beards sounding as if he’s got his Mick Jagger voice on at times. 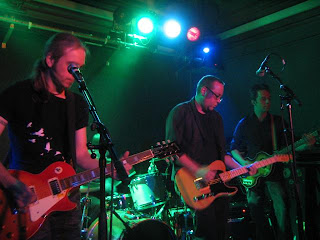 By now there’s a healthy crowd inside the Social, all waiting for the Delay’s to take the stage, which they do at 9.30... so what was all the fuss about stage times...

As a band they are always entertaining, always alluring and always a good target for hurling underwear at (so I’m told), if you’re near enough. It also appears that they have now learnt a thing or two about how to hook an audience. Their first three tracks tonight arrive in an almighty hurry with little or no chat and they all go for the jugular. ‘Lost in a Melody’, ‘This Town's Religion’ and ‘Friends are False’ make a lively trio. The latter, tellingly being the only track tonight from their last album, 2008’s patchy ‘Everything’s The Rush’. 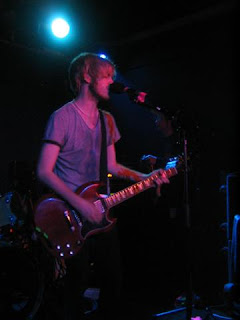 All the old faves are there of course, ‘Nearer than Heaven’, ‘Wanderlust’, ‘Long Time Coming’, with Greg’s voice on top form, as well as other tasters from their forthcoming fourth album, ‘Star Tiger Star Ariel’, in the form of the guitar driven ‘Lost Estate’, ‘In Brilliant Sunshine’ sung brilliantly by Aaron and the new single ‘Unsung’. Then Greg’s back to leaping around the stage again as ‘Panic Attacks’ ignites the venue. 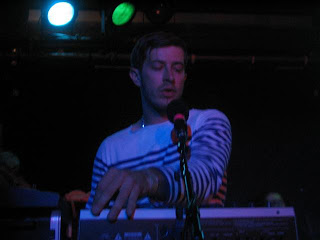 It’s good to see a different oldie thrown in as 'Bedroom Scene' from 'Faded Seaside Glamour' makes an appearance but things get even more obscure as requests come from the floor. We seem to have a knowledgeable crowd tonight, who are shouting out for obscure album tracks that I’m not familiar with. Please stop it. That’s exactly the sort of annoying thing that I’d do. What’s even more annoying is that no band ever takes the blindest bit of notice when I do it but tonight Greg Gilbert actually takes on board the suggestions and steps up to the plate, adding an acoustic excerpt from 'You Wear The Sun' to the set list before the closing ‘Valentine’.

Then for the encore I’m hoping for ‘Hey Girl’, which apparently they’ve resurrected recently and been playing a lot but some other clever sod in the audience wants something more unfamiliar and of course, gets it. Greg apologises for barely being able to remember the words, or so he says, before obliging the fan and performing acoustic duties again for the requested ‘Overlover’. Can't complain, I do love an obscure oldie. 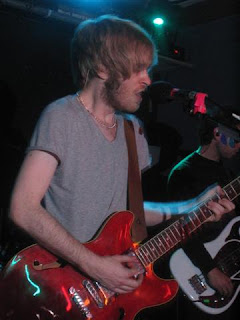 Then we’re back on familiar territory to close, with a lively ‘You and Me’. As always the Delays can be relied up on to put on a good show and tonight was no exception.
Posted by FitForNothing at 4:00 PM