The Jury’s Still Out

I needed to try out my new running shoes either today or tomorrow. I feel it would be easier this morning rather than on ‘squash legs’ tomorrow, so I run in from Borrowash to work.

The run went ok but more importantly... the trainers? Inconclusive I think. I’m not convinced about the amount of cushioning in them, they just don’t seem that bouncy to me but my knees are ok and that’s the test, although it was only 7k. So the jury’s still out. Buxton will be the test obviously... of shoes, fitness, sanity...

L reports a bit of a deer problem on the Park or should that be a bit of a dog problem. That being our little dog with the big attitude.

Daughter has her first AS exam today at the Nottingham Ice Arena where Lady Gaga is playing this evening and she was doing her sound checks during the exam apparently. So we know who to blame if she fails. I suppose a couple of hundred A-level students suing her for failing their English Language would be a mere drop in the ocean to Lady G. Or perhaps she provided inspiration for their essays? It doesn’t seem to have put Daughter off going to see her tonight and at least she has the good grace to turn up this time. 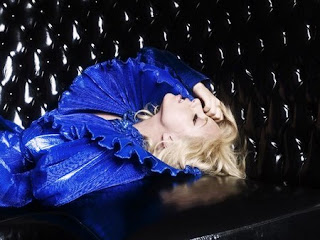 Squash does not go well.
Posted by FitForNothing at 4:00 PM