There’s a bit of a run going on down at Wollaton Park today. The Run To READ 5k and 10k, organised by READ International.

It wasn’t really on my schedule and I’m trying to have a bit of a break from running to let my knees recover a bit. All the same I entered this but mainly because a couple of friends of mine were doing it and I felt I ought to support them by joining them in it.

In the end only one of them enters, into the 5k. L and I do the 10k. It’s not the best organised or best supported of races. It’s clearly new ground for the organisers but hopefully if they run it again, and I believe they intend to, they’ll learn from this one. It’s not been terribly well publicised and there’s a distinct lack of club runners here, which hopefully means I’ll get a good overall placing.

At the start, in the rain naturally, about twenty students put their heads down and sprint for it. As if they’re taking on Usain Bolt in the 100m but instead they just look like a bunch of school kids taking on a fun run and naively thinking they can run like that all the way around.

I hang back and let them get on with it. Even if they can sustain that unlikely pace, they may only be doing the 5k. None of them look like ‘serious’ runners and sure enough one by one they run out of steam and I pass them. I find the only person around me who looks remotely like they can last the distance and I use her to pace me around the early stages.

It’s actually a nice course. They take us around the lake; races in Wollaton Park don’t normally do this. I guess the smaller field makes this possible.

My running partner pulls me up into the top ten, then the top five and then the top three. By now we’re running side by side and after about 3.5k we take the lead. Something that has never happened to me before. Nosebleed territory.

Thing is I was pretty sure that I could drop the girl any time I wanted and go it alone but running the remaining 6k on my own with the ever present threat of someone attempting to reel me in doesn’t appeal at all. So I stick with her. We cross the line at the end of the first lap, side by side, nominally winning the 5k event and I think to the immense surprise of my non-running friend. I think he was impressed.

I’m still feeling fresh and confident. Although now obviously I have to start thinking about winning this. Oh the stress. Had I known that leading a race on Saturday morning was on offer I wouldn’t have had quite so much to drink last night... or perhaps I’ve stumbled on the unlikely information that a night out on the lash before a race is actually good preparation but it’s not in any of the training plans I’ve read.

Then... I knew this was too good to be true, we have company. Somebody is attempting to catch us up. I look behind. He still doesn’t look much of a runner. He’s got tracksuit bottoms on for a start. There are limits. I am not being beaten by somebody running in tracksuit bottoms, under any circumstances, no matter how good he is.

At 8k he’s right with us, not alongside us sharing the pace obviously, just shadowing us. Knowing that the last km is all on grass, at 1.5km to go, I apologise to my running partner, as I put on a spurt, dropping her and hopefully our shadow as well, doing so whilst we’re still on the path. Dropping her is not a problem but the shadow in trackie bottoms comes with me. Damn.

9km. On to the grass and I’m going to have to attempt some sort of sprint. So I hope there’s good traction and that I can dodge the pot holes and mole hills. I sprint but he proves stubborn. I still can’t shift him. 9.5km. I have a bit of a gap but he’s still with me and I’m dying, counting and recounting every one of last night’s drinks. I re-live each one. Now I have 10 metres. That should be enough. Surely.

Victory. I don't quite believe this and unfortunately no one I text does either.

Shadow comes in second and my former running partner third, although she almost catches him on the run in. She too obviously has limits and also doesn’t want to be beaten by somebody running in tracksuit bottoms.

As winner I get £20 in Sweatshop vouchers but there’s no trophy, no good bags for all runners (as promised), and nothing for first lady or the second place guy. Entries are clearly down on what they wanted/expected but then they still managed to raise over £900 for the READ Book Project. Which is all well and good but if you don’t look after your competitors they’re not going to come back.

Football wise, Derby have hung up their boots for the season, so I keep my eye on Forest in the play-offs. It’s good to see that they lose 2-1 at Blackpool, although I’m sure they’ll turn it around in the second leg.

Then there’s Leeds United. It’s been so amusing seeing Leeds struggle in League One for the last three seasons but to be honest the jokes over now and I’d like to get back to playing them. Problem is they seem determined to not go up. All they have to do is win today at home to Bristol Rovers, not a big ask, but they are soon 1-0 down and down to ten men after a sending off. So it looks like the charade will continue into the play-offs but then somehow they come back from that, win 2-1 and stumble across the finish line.

I think the way I sold tonight’s entertainment to L was 'Do you fancy something pink for your birthday?' It’s her birthday today by the way. What I was offering was big and pink and on at the Sheffield Leadmill. She even gets to drink the pink stuff, Rose, in the bar beforehand.

First though, Esben and the Witch, from Brighton, who take their name from a Danish fairytale... They take the stage with a couple of miniature street lamps and a porcelain owl or two. Enough said? Singer Rachel Davies, stands between her two guitarists and delivers an ethereal sound that is perhaps part Portishead, part Bat For Lashes, maybe. Most of the real action seems to revolve around the solitary drum and cymbal that is set up in the middle of the stage. 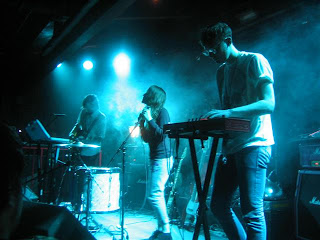 Dark, gloomy and intriguing... nothing like tonight’s headliners, The Big Pink.

Who open with the wail of guitars and an ear shattering rendition of ‘Too Young To Love’, that sounds little like it does on record. This is the approach they take to most of their material. They make everything bigger, beefier, louder, more distorted. So much so that some folk who have come for more of the bubbly pop of their hit record ‘Dominos’ immediately seem disappointed. Once you make the mental adjustment though it’s all rather good. Personally I have never actually been a big fan of 'Dominos' anyway, the track quickly became irritating but I was swayed, surprisingly, by the heavier sound of the rest of the album which I rather like. 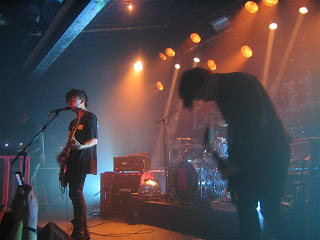 The Big Pink are actually officially a duo. Consisting of singer/guitarist/self appointed rock God Robbie Furze and his keyboard maestro Milo Cordell. Cordell has his hoodie over his head all night as he prods at his keyboards, while simultaneously working an impressive range of effects pedals (for a non guitarist) and updating his Facebook profile via his laptop (or whatever else he’s using the laptop for). These two are joined on stage by their scantily clad drummer, Akiko Matsuura. Who was hidden from my view practically all night (shame) by a combination of her own drum kit and the band’s bass player who completed their live line-up.

'At War With the Sun' followed again accompanied by Furze’s shrieking guitar and a bass cranked up so loud and rumbling it’s almost painful. Although this is probably my own fault for standing right in front of the bass player’s amp. 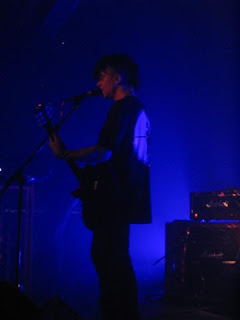 The guitars are cut back slightly for ‘Velvet’ and ‘Frisk’, which are slightly more electronic, as tracks from their album made up the first half of the set. The best of which are probably an excellent ‘Crystal Visions’, sounding particularly huge tonight and a fave of mine, the wonderful ‘Count Backwards From Ten’.

The content of the second half is less clear cut, as they slip in a few covers and a new song. They cover ‘100%’, although I’m not sure where they got it from. Didn’t Mariah Carey do a song called 100%? and didn’t Sonic Youth? To be honest, it could be either or neither. Someone please advise. 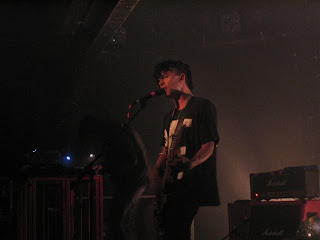 No one is particularly talkative, apart from the odd cry of 'Sheffield’ from Furze and a brief introduction to a new track called ‘Twilight’, there’s little chat.

They finished in more of a pop mode with the new single, ‘Tonight’, a cover version of Beyonce’s ‘Sweet Dreams’, yes really and of course, 'Dominos'. I hate it when bands save their 'big' record until the end but it sounds good tonight and at least they don't elongate it.

We get back home at 11.30, quietly park the car in the street so as to not disturb the dogs’ slumber and then head into town for a beer or two. Son texts to ask if we’re in town and L informs him where we’re headed. Moments later as we walk into the bar, there he is sat at a table, waiting for us, looking very much like a man with a thirst.

After a few drinks and the walk home, I crawl into bed at 2am. That is after setting the alarm for 6.15. Dog show tomorrow...
Posted by FitForNothing at 4:00 PM