It’s much sunnier today for the ride in, much more like spring but it’s still a cold! Spring? In fact we’re only just over a month away from summer. Believe it or not.

L hasn’t complained about MD on his morning walk for ages. You know, I think they’re starting to get on and it has only taken two years.

One of the first things the new government does is ban mobile phones from cabinet meetings. Bravo. Now if they can ban them from:-

Colleges - I have a vested interest, a Facebook obsessed Daughter
Supermarkets - I don’t wish to hear your argument about what soup to buy
Buses - I don’t care what happened in Eastenders last night
Streets - I’m sick of dodging people who aren’t looking where they’re going
Cars - Oh they did that didn’t they... apparently.

On the way home a fit looking chap whizzes past me but then stops for a chat at the lights, just to rub it in, which is nice... He apologises in advance for what he says will be a slow getaway from the lights. Yeah right. Somehow I don’t believe him and sure enough once the lights go green he accelerates away from me as if I’m not there.

Squash... isn’t worth mentioning. Except to say that L forces me to have a second pint in the pub afterwards because she is late meeting me there, after she decides to run there. Not that I’m complaining.

Oh and my squash opponent turns up in a new t-shirt with the final Fantasy League table printed on the front. Yes, it was he who won it. Not content with beating me every week at squash, he goes and wins that as well, by one solitary point. Did I mention that? 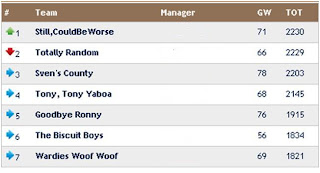