I’ve think I ate too much pizza last night. I can barely move this morning. Yet I still attempt to force the pedals round on my bike.

Perhaps L was right last night; it has gone a bit cold. The thermometer says a measly five degrees this morning, surely not. Personally I didn’t think it was quite cold enough for central heating but the radiators obviously had other ideas and turned themselves on. I shall have words.

All the same I decide to go for the long trousers option on the bike, as I attempt to find work through the fog. It’s well gloomy, maybe it’s about time I dusted off the bike lights.

I’ve found the perfect training plan, for women anyway. As trialled by the England Women’s Hockey team. Making them train in a sweat box in just a sports bra and shorts combo is sheer genius. I suggest to L that I think it should be the next part of my training plan for her... 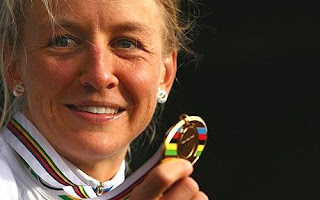 I should have been reviewing the Emerge NME Radar Tour but unbeknown to me it was a 10pm curfew. Should have guessed really. The doors opened at 7pm and Flats were apparently on soon after, so we missed them completely. Sorry guys. The people who schedule these things obviously don’t have dogs to walk.

Wilder aren’t even here, choosing to only play three of the dates on the tour. Presumably they won’t play Nottingham because they don’t want to detract from their own headline show at the Bodega in three weeks time.

Chapel Club were on at 7.45, so when we arrived just after 8pm it was to the sound of ‘O Maybe I’ being belted out from the stage. We assume it was from the stage, we can’t see it because it's so busy. Full. Blimey, wasn't expecting this. We can barely get in the door. So we head back outside to go up to the balcony. Closed. No balcony. Odd. Ok. So we're going to have to fight for a decent spot. I grab L by the arm and pull her through the crowd. She’s not as rude as me at pushing through. When we get closer we suddenly burst out into a clearing. No one is anywhere near the stage. Why is that people are often too ‘shy’ to stand close to the support band? Anyhow not our problem. Voilà, front row. Again. We always are for The Joy Formidable.

We only get to hear four tracks from Chapel Club, but they are good, very good. Not remotely chatty though. I’m just getting really really into it when ‘All The Eastern Girls’ and ‘Paper Thin’ close the set. We were handed a CD of ‘All The Eastern Girls’ when we walked in which was odd as I thought that was their new single but it turns out it’s just a blank disk to burn the track on to. Odd concept. 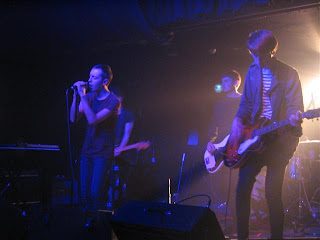 There’s not much setting up to do because while Chapel Club have had their drum kit in the ‘traditional’ position at the back of the stage, the Joy Formidable’s Matt Thomas always has his sideways on. I thought this must be due to space constraints at some of the small venues they've played but no, apparently not. Lifestyle choice. I suppose it makes him more visible. 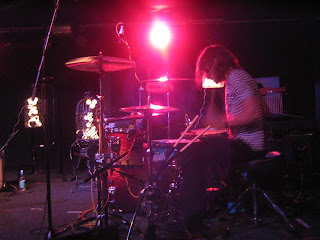 He takes the stage alone, amongst the golf balls in bird cages and what appears to be British Sea Power’s air raid siren at the back of the stage. He starts to play, then Ritzy and Rhydian come on to join him. ‘Cradle’. Magnificent as ever. The golf balls turn out to be fairy lights. Well weird.

Next up, the only truly unfamiliar track of the night ‘Magnifying Glass’, which ends with Ritzy spilling her wine for what she says is the third night in a row. Someone brings her the whole bottle, which she then ignores for the rest of the night. Ungrateful or what. 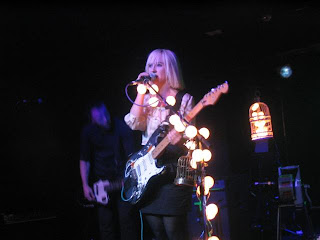 The new single ‘I Don't Want To See You Like This’ follows but there is a lack of new material considering they have an album coming out in January. In fact there’s less unfamiliar stuff than when we saw them last in Derby and that was back in June last year. What’s worrying me is that they are now referring to last year’s ‘A Balloon Called Moaning’ album not as an ‘album’ but as a ‘mini album’, saying that in January they will release their ‘debut’ album. Which all sounds like record company talk to me and probably, but hopefully not, just an excuse to recycle a lot of the three year old tracks off the previous record. That’s not a good route to take, just look at bands like ‘Glasvegas’. They have been stuck in a creative rut playing the same songs over and over for five years now whilst their audience has got bored and moved on.

Then the band fall back on those three year old ‘classics’ to which they’ve added some intros and some outros, generally extending them. It’s time to crack open the Kopparberg. ‘Greatest Light’. Awesome of course. ‘Austere’. Superb. The sound often isn’t the best in Rescue Rooms but they certainly make it work for them tonight. 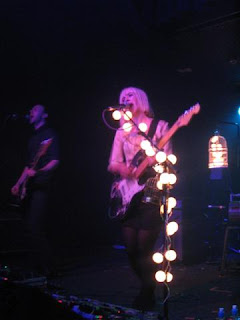 It’s quite a show; they’ve clearly worked on their performance and polished up their stage show. Though Ritzy almost gets a symbol in the face when she fronts up to Matt on the drums.

My favourite JF track and the best moment tonight is last year’s ‘Greyhounds In The Slips’ single, simply ferocious tonight, but there is no place in the set for its follow up ‘Popinjay’.

Then Ritz picks up an acoustic and we get a surprise in the middle of the set. Well more of a shock really. I can’t complain, I love an obscure moment and this was one. They play a slowed down version of 'My Beerdrunk Soul', which was their ‘Christmas song’ of a few years ago. It’s perhaps a bit early for all that but then I’m sure a lot of the population have already completed their Christmas shopping. I hope Ritzy Bryan isn’t one of them.

Then it’s back to that non-album of last year and Matt’s orgasmic drumming intro to ‘The Last Drop’. Ritz, very well spoken tonight, thanks us all for coming and they close with an eventful ‘Whirring’. During which I thought she was going to do a 'Leeds' on us with her guitar. At the festival she totally smashed up her guitar but tonight the air raid siren gets it instead. I just hope BSP don’t want it back undamaged. Matt has a bit of a fit with his sticks and Rydian breaks a string on his bass. He starts kicking it on the floor and into Ritzy, accidentally I assume. It’s all a bit unnecessary really. Good gig though. 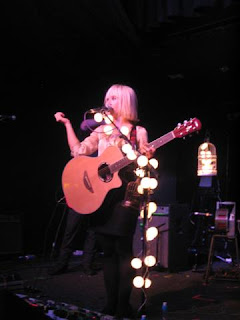 There’s no encore, presumably because of the damn 10pm curfew. It’s a shame because the crowd seemed up for more but it didn’t happen. We were out the venue just before 10pm. How often does that happen?

Time for a couple in the Ropewalk. Good job we’re in the car. L has a ton of Son's stuff for Uni stashed at her work that she needs to bring home. Blimey how many pot noodles has he bought?
Posted by FitForNothing at 4:00 PM