It’s a nice leisurely 1pm start up at Crich for their first ever 10k. This enables L to use Pilates as a warm up and for me to wear the dogs out on the park, so that we can dump them at home.

The start is on the recreation ground, as part of the village fete, but the first problem is the car park is half a mile away. Not very convenient but in the end I think it’s closer than they said, so not much of a problem. Though it perhaps highlights they have a problem assessing distances...

There’s an uphill start to the top of the recreation ground but then it’s generally downhill for the first few miles. We go through the centre of Crich village, negotiate a few stiles and jog across some pleasant countryside. So far it’s all very picturesque... then we go into the woods.

Suddenly things become a touch more challenging. Well actually a lot more challenging as we plummet downhill on very slippery paths, sometimes muddy, sometimes rocky, but never with much grip. Well at least I think it may have been a path. I couldn’t say for sure.

It’s exceedingly tricky underfoot and also at head height as I dodge overhanging branches whilst simultaneously hurdling part-hidden tree roots. Death defying doesn’t really do it justice. I see quite a few people fall but somehow I manage to stay on my feet. When I do stumble and grab a tree for support about ten people tumble past me as they have no chance of stopping on such a steep incline.

This was followed by a battle through some seriously deep undergrowth, overrun with bracken and nettles, nice. Many people who were clearly expecting a fairly bog standard 10k were not happy. I was expecting a hilly off road one but wasn’t quite prepared for an SAS assault course like this. Perhaps I was being too picky last night; perhaps that nice Tara Kinder 10k would have been more me after all. Three and a half laps of a grit track around Elvaston Castle suddenly has its attractions.

Eventually we emerge on to the banks of Cromford Canal and a long stretch of flat and boring, as we follow the canal for two miles through to Whatstandwell. It's so glorious I want to kiss the towpath. Personally I love a bit of a grind and I regain all the places I lost on the descent.

I’m at the drinks station at ‘around’ half way on 38 minutes. Either this ain’t half way or this ain’t 10k. Perhaps like with the car park, they’re not good on distances. The race info did say 'approximately' 10k I suppose.

Then we start to climb. This is ‘the’ climb, all the way up to Crich Stand and it gradually gets more serious and relentless as we continue to gain height. It’s not all runnable. Well it is but when it becomes quicker to pace it out, rather than to run it, then that’s the time to walk. I cope with this better than most and continue to gain places all the way up to the Stand.

Then it’s downhill all the way to the finish, via the local graveyard, with a chap in hot pursuit of me. There’s no way he’s coming past me... I’ll impede him if need be and eventually he seems to give up.

I cross the line in around 54 minutes, which from whatever angle you look at it, is my slowest 10k ever by a huge margin. 14th overall though, which is impressive. I am handed my commemorative biscuit, I kid you not. Perhaps it's a pun. The race did take the commemorative biscuit somewhat. Tastes good though. 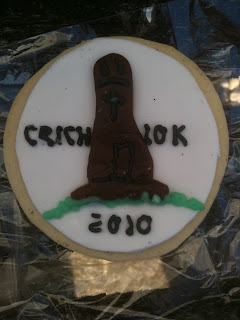 (and yes I know it looks pornographic)

Later many of the runners, including L who is sporting some nice lacerations on her legs and who comes in amongst a self-help group of girls at the back, complain about going wrong and getting lost in the woods. It turns out probably everybody went the wrong way and we all ran 7.1 miles and not the 6.2 it should have been. Apparently there was a sign in the woods pointing the wrong way and a lack of marshals there e.g. there were none.

Somehow we recover without the use of alcohol and instead retire to a local cafe for coffee and cake. L seems less spooked by the whole experience than I do.

Later we head out, L has promised me a curry but unfortunately they have the rather wonderful Gales HSB in the Poacher and that kind of takes over the evening. The curry though is still very nice, though I’m well knackered by the time we get there and perhaps a touch drunk as well. Son comes down to join us. The lure of a free curry too good to resist.