The weather is miserable but dry, so far. I’m feeling lucky, so I decide to dodge the inevitable rain on the bike. It doesn’t rain.

L does the bike too, indoor. She executes my training plan on the bike with the broken seat. My training plan obviously isn’t tough enough if she has to spice it up like that. I must review it. She says she’s feeling quite pleased with herself. I’ll have to put a stop to that as well.

My luck is holding and it’s still not raining as I cycle home. Though I forget that they have the road up in Stapleford. They have scraped the surface off, ready for resurfacing. It’s not before time; this has been easily the worst section of road on my journey since I started cycling to work four years ago. It’s even worse now of course with the road up, a real puncture trap, so I should have taken a different route but I forgot. Still my luck holds. At least today they have started to lay tarmac on a stretch of it and it’s lovely. It will be great when it’s all done.

I get home and take the opportunity of a night free of training, neither dog nor running, and the lack of rain, to cut the front hedge. There I am whizzing along with the cutters when I inadvertently chainsaw through a wasps nest. Not so lucky now. Ouch. Well that doesn’t really describe it. I leg it round to the back garden pronto but not before I’ve taken at least half a dozen hits on the arm, neck and head.

Nursing my wounds, I watch from a safe distance as a reinforced wasp army of hundreds circle the front garden ready to launch a fresh attack should I dare to pick up the hedge cutters again. Later, as things calm down, I inch back into range and notice the nest... it’s the size of a football. How did I not see that! 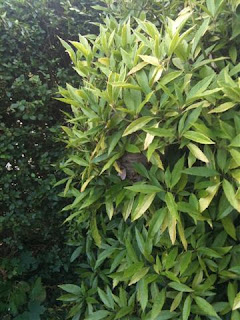 It is around this point that I realise that the damage to myself is more severe that I first thought. I am now coming out in some all over allergic rash of hives, in a nice range of colours ranging from yellow to red. Within the hour my body was looking impressively like a relief map of the Lake District. L calls NHS Direct who recommend immediate admittance to A&E. I settle for some anti-histamine pills instead. Then after another hour or so the worst of the mountain range are starting to subside. So it seems I might live after all. Still, I suggest to L that she best get romantic with me tonight just in case it’s her last chance... she doesn’t actually say no but I can tell that being seduced by Mr Spotty isn’t top of her ‘to do’ list this evening.