The legs could do with a rest but exercise options are limited this week so I drag the old body on to the bike. Which I enjoyed, despite the cold (just when are the mornings going to warm up?) and a brief rain storm!

One of our staff members is stuck in the Dominican Republic, something to do with some dust or something. A likely story. He’s probably having us on.

L points me at some new research. That concludes that men and women go through the pain and pleasure of running for different reasons. No kidding... the thrill of competition is said to attract men while women run because they want to lose weight or improve their mood. I could have told them that for nothing!

On the way home I almost single-handedly simplify the ballot paper for the Nottingham South constituency. Our conservative parliamentary candidate and her entourage are standing in the middle of the road. Are these people bright enough to govern? Or is this what they mean by a visible presence campaigning? They soon leap out of the way when a cyclist comes towards them.

Suppose at least I knew who she was, she’s been on our case for the last couple of years. We’re a target seat you know. I have absolutely no idea who the other candidates are, they have been totally anonymous and our sitting labour MP is retiring. That’s not to say that being anonymous might be a vote winner.

Relatively speaking, it’s quiet night for us tonight. Another gig but more local.

Tonight’s support, ‘Lucky Soul’, have a happy slightly appropriately soulful sound and in Ali Howard they have a sing that looks and sounds like Dusty Springfield. She also impossibly perky throughout their generous ten songs set. Far too happy for a Monday night and for their own good.

There are six of them on the small stage at the Bodega. Not enough room to swing a tambourine with tassels on it but she manages. It’s all very pleasant but actually a bit dull and repetitive to be honest. Most of the audience manage to master tapping a foot to the rhythm whilst simultaneously looking bored.

I amuse myself by watching her feet, she’s gone on stage shoeless and I spend half an hour wondering how she’s managed not to snare her tights on the metal edges of the stage floor. 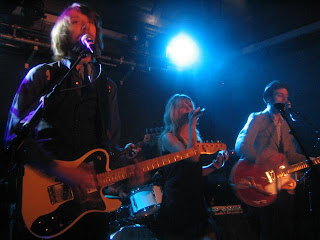 The Primitives too can do happy. Late last year, after nearly 18 years in slumber, they reformed for a couple of live shows, one in their home town of Coventry, the other in London. This must have been a success because they have now embarked on a wider tour of the UK. This begs the question, what do you do when you don't play a gig for 18 years. Do you stash all the equipment in your loft, waiting for such a day or do you hire a new lot?

The band were hugely successful with their first album ‘Lovely’ and of course it’s hit single ‘Crash’, a number 5 hit in 1988, but their career faded after that. They split in 1992 following the failure of their third album, ‘Galore’.

To be honest I’m not expecting great things but, after a slow start, they prove me wrong. Opening with a slightly subdued ‘I’ll Stick With You’, followed by ‘Dreamwalk Baby’ which also doesn’t quite sound its bright self. The rarity ‘Everything's Shining Bright’ doesn’t seem familiar to many and doesn’t help. There’s a hint of perhaps going through the motions a little but then again the Bodega sound is not brilliant. The lighting too, plays havoc with photography again. 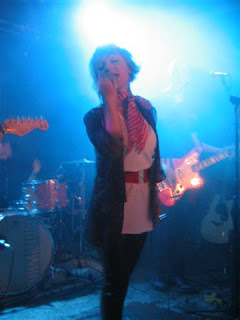 Although ‘Thru the Flowers’ picks things up it isn’t until ‘Way Behind Me’ that the crowd start to get into it. Tracy Cattell seems relieved and starts to talk a little to the crowd but even then she remarks how quiet the crowd are. Quiet from both sides. Quiet crowd. Quiet band.

Tracy looks exactly the same as she did. She still short of course, you forget how short. Once they get going you realise that the band’s songs haven’t aged too badly either. Perhaps not sounding quite as twee as they were but can you still do twee when you're over 40? 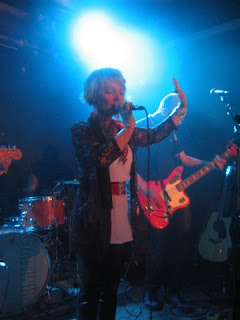 As expected a lot of the set comes from the ‘Lovely’ album and earlier releases but it’s good to see them lifting a few tracks off the later two albums but the blank looks that meet ‘Empathise’ off ‘Galore’ confirms that that record didn’t sell well. 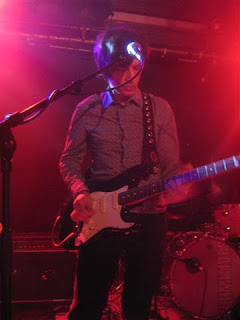 ‘Summer Rain’ is as pretty as ever and then we get to hear what the band are up to now. They are recording an album of covers of songs by lesser known female vocalists. Tonight they play 'Need All The Help I Can Get' which was originally recorded by Suzi Jane Hokum back in 1966. 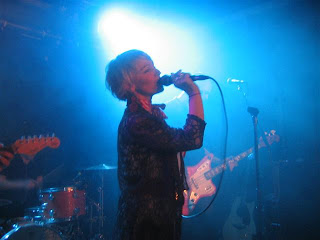 It isn’t until they hit us with an excellent quartet of songs, starting with ‘Stop Killing Me’ that things really take off and the pace improves, ‘Sick of It’ follows, still bursting with raw energy and then their most famous moment ‘Crash’ lifts things a notch higher. By the time they’ve finished ‘Buzz Buzz Buzz’ they have the crowd well and truly won over. It’s just a shame we’re nearly done and that the finale is more low key. The 1991 single ‘You Are The Way’ probably isn’t known by that many, neither would be the b-side ‘(We’ve) Found A Way (To The Sun)’ that they close with, which is dedicated to their bass player, Steve Dullaghan, who died last year. It is reported that it was at his funeral that they thought about this reunion, partly as a tribute to him.

Then for the second night in a row I witness a top encore. A sparkling ‘Nothing Left’ before 1986's ‘Really Stupid’ closes the night in style. I think it's only the spreading waistlines of some of their fans that prevent a mosh getting going.
Posted by FitForNothing at 4:00 PM