It’s an early start this morning as I reprise my favourite event of last year and treat myself to an early birthday present... the Ashbourne Duathlon. A 12k jog around Carsington Water, then a pleasant tootle around a 40km route on the bike, followed by a final 4k ‘blow the cobwebs off’ jaunt on foot across the dam wall.

The first run is harder than I remember, the path around Carsington Water is far from flat and does make the old legs sting a bit. All the same I reckon I was quicker than last year, although comparisons are difficult as they are taking split timings in different places. After that I think my bike section is actually a bit slower, despite the fact I’m on my new bike which I didn’t have last year. Several traffic hold ups don’t help but basically I think I’m paying for the run being quicker.

I must be taking it all far too light heartedly as I even stop off to hug the two dogs as I pass them on the final run.

My time is about 40 seconds slower than last year but when you’ve been out there for two and three quarter hours, I guess that’s not much. Pretty much the same performance really. I seem to have plateau-ed.

In the afternoon, I think L is a little gobsmacked that I want to disappear off to a football match and it’s not one of Derby’s games either. Tamworth is my destination for Tamworth v Ebbsfleet. Let me explain.

In April 2007, a website called MyFC was launched to raise money to buy a football club and then to run it over the internet. It sounded like the ‘Football Manager’ game, so I thought I’d give it a go. By November 2008 there were 20,000 members and after looking at several clubs, a decision was made to acquire Conference National side Ebbsfleet United.

Members vote on every aspect of the club. They elect the board, select the club kit supplier and the kit itself, specify the weekly playing budget and even what goes on sale in the snack bar. At one point even team selection was mooted but it wasn’t a terribly good idea.

In May 2008 came MyFC’s greatest moment as Ebbsfleet lifted the FA Trophy at Wembley, Unfortunately things haven’t gone quite so well since, membership has dwindled, attendances have fallen along with performances and the club is struggling for cash. More members are required to help the club survive, so anyone new wishing to join would be very welcome.

It all comes to a head today with the final match of the Conference National season with Ebbsfleet in the relegation zone and needing to win, along with other results going their way to stay up. A plea for support has gone out to the members. It’s also a chance for me to see this southern based club in the flesh for the first time. It’s also cheap, Tamworth are having a ‘pay what you like day’ which is a considerable reduction on the usual £12. There’s an impressive 1,600 attendance and an awful lot supporting Ebbsfleet.

Thankfully, because the legs are not too steady after the morning’s exertions, I manage to find a wall to sit on. It’s not a bad match. Typical lower league stuff but actually more fun than watching rather predictable Derby. I really must revisit Ilkeston Town, where I used to go regularly. Facilities are bit rough though, the toilets desperate. Food and beer were decent and cheap though, they even had real ale, never get that at Derby. 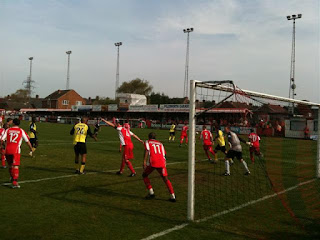 It’s a 4-3 ‘classic’ with some horror show defending and Ebbsfleet come from behind to win. Unfortunately wins for Eastbourne and Gateshead still send them down to Conference South and an uncertain financial future. 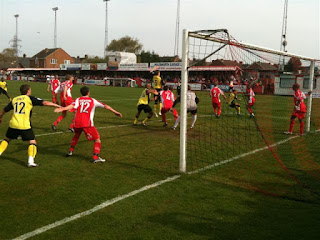 After which I head home and then meet L at Cast, where we have a few beers to warm up for the gig tonight or so we thought. It looks awfully quiet outside Rock City as we walk down. When we get there we find out why. Black Rebel Motorcycle Club have cancelled tonight’s show due to illness. They’ve rescheduled for 3rd December, which is practically next year.

So we have a bit of a problem. We’re already half drunk and it’s only 7.30. It’s also a shame that we didn’t find out about the cancellation earlier as we would have liked to have taken in another film from the Screenlit festival but now it’s too late.
Posted by FitForNothing at 4:00 PM