Isn’t This How Students Live?

After a rather heavy night and an indulgent lie in, I couldn't even drag myself out of bed to make the 11:30 cut-off for the Fantasy Football changes. Not that I could decide what to anyway. I shall carry this week’s change over.

In the end, I get up around 12:00 and give the dogs a session on the park. When I get back there’s only time for fifteen minutes at home before we head out again, although we’ve only just got up. Isn’t this how students live? I think I can remember... We’re head out, intending to do an hour at the gym before meeting the kids (yes the whole family) in town for a film at 5:30 and a meal. Together! Happy families or what?

So what great film is it that has drawn us all together like this?

Well it’s another of those superhero spoof movie and I’ve been talked into seeing it... However, this one is funny, very knowing, it has a plot, a sharp script and ermm, even character development.

Unpromisingly it starts out like teen romcom with Dave Lizewski (Aaron Johnson) living an existence that is mundane but typically normal. He is unnoticed by most people and particularly by girls, especially the girl of his dreams, the lovely Katie (Lyndsy Fonseca). His only chance of getting her to even talk to him is to turn gay, perhaps... or perhaps not. 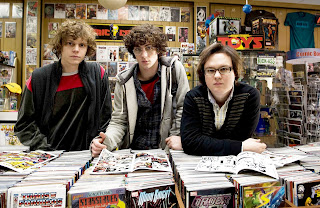 Our Dave wonders why no one ever tries to be a superhero and then decides to fill that particular void himself, despite the obvious flaw in his plan, that he has no super powers. All the same it would be nice to not have to keep handing his cash and mobile phone over to the local thugs. Plus it might just get him his girl.

So he dons a dreadful green wetsuit, calls himself ‘Kick-Ass’, heads out to thwart crime and promptly gets his ass kicked. He winds up in hospital but he is undeterred. Once patched up, with metal plates holding his bones together and with severed nerve endings, he is now less susceptible to pain. Belief slightly suspended. 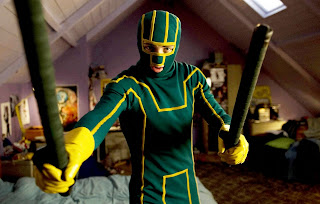 His modest ambition for Kick-Ass, simply to rescue a cat, ends up with him accidentally intervening in a mugging and when he gets filmed fighting off three men he becomes an overnight internet sensation. He also finally gets Katie's attentions, although for the wrong reason. Yep, she assumes he's gay, told you it works. 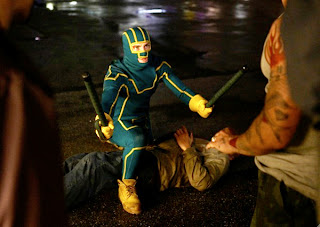 When he attempts to do a good deed for Katie, in dealing with some unwanted attention she is getting, he gets himself in over his head. He has stumbled into the world of gangster Frank D'Amico (Mark Strong). Luckily for him he discovers he is not the only super hero in town as 'Big Daddy' (Nicolas Cage) and his homicidal killing machine of a daughter, the twelve year old 'Hit Girl' (Chloe Moretz) come to his rescue. 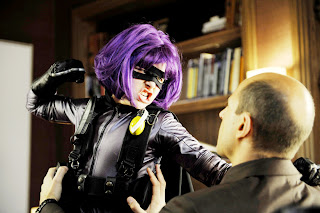 On the plus side, he unmasks Kiss-Ass in front of Katie, confesses he’s not actually gay and once she gets over the initial disappointment, he gets his shag. Result.

This is perhaps ample compensation because from this point onwards it is no longer his movie. The insanely violent Hit Girl simply takes over, dominates every scene she's in and gets all the best lines to boot. She is the character even Quentin Tarantino hasn’t thought of. She whirlwinds through the movie, slaughtering anybody who gets in her way, hurling unrepeatable dialogue as she does so and boy does she look smug about it. Her enjoyment of mass murder is simply infectious and the violence... well it's never ending as she racks up the body count. It’s all very entertaining but I have no idea how the film gets away with so much under its 15 certificate. 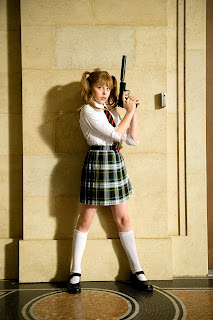 Then there’s the great soundtrack. Good stuff from Primal Scream, The Little Ones, Sparks, The New York Dolls are all used at exactly the right moments but then any film that has the The Dickies’ ‘Banana Splits’ in it has got be on the money. Daughter will kill me if I don't mention The Prodigy. Oh and there’s also music from that woman, Ellie Goulding, too. Every silver lining has a cloud of course.

As you can perhaps tell I quite liked this one. It’s a blast. The bad guys are good, or rather bad, and believable. In fact there are very few, if any, unbelievable bits or ridiculous plot twists and when someone dies, they stay dead.

The acting is good too. Mark Strong, as ever, makes a good villain, his character getting more and more violent as things go against him. Cage is excellent as Hit Girl’s doting father and Moretz herself is simply brilliant. Oh and I nearly forgot our Dave, Aaron Johnson, yeah he's pretty good too.

If there is a criticism it is that it probably gets too carried away with itself and moves from being a clever pastiche into simply being a superhero movie itself. I also have a problem with Red Mist, who's dressed up like a drag queen and Hit Girl is uncharacteristically under-prepared for the final battle but it's kind of hard to slate.
Posted by FitForNothing at 4:00 PM