Reasons To Be Cheerful

I get a few jobs done today, walk the dogs, go to the tip, build a new computer for Daughter and change the tyre on my bike. As the new winter tyres I want are currently out of stock and on order I put an old summer slick tyre on instead. I’m sure we’re not going to get any more wet or icy weather... are we?

Then I spend the afternoon in the gym, mainly on the bike. L and I both do ten miles. I take the exercise bike next to hers, give her a head start and then wave politely as I overtake her.

I power along averaging something like 220-250 watts, so I’m well on Hutch's tail. Not. That’s Michael Hutchinson who’s reckons on needing to average 400 watts for an attempt on the world hour record. So just another 150 to find then.

In the evening we’re back at Broadway to immerse ourselves in ‘Sex & Drugs & Rock & Roll’. This is of course the new biopic of the late Ian Dury. Personally I was never a great fan of his music but I was still intrigued enough by the man to go see the film. I knew his life would make an interesting story.

Ian Dury contracted polio at the age of seven, most likely from a swimming pool during the polio epidemic of 1949. This resulted in him spending a year and a half in hospital, including six weeks in a full plaster cast, followed by an extended stay at a institution for disabled children, which resembled a prison and whose ethos was to toughen their 'inmates' up. A view further endorsed by Dury father, Bill (Ray Winstone) who aside from seeming to abandon his Son in the institution also believed in encouraging his son to stand on his own two feet and callipers. It was his sufferance of polio and his resultant treatment that probably moulded Dury into the determined and uncompromising man he became. If he felt he missed out on his childhood was lost, he was about to make up for it.

Golum himself, Andy Serkis, plays the role of Dury putting in a passionate and brilliantly believable performance. Serkis is uncannily like Dury and no mean singer either, performing all the songs himself along the real Blockheads.

Early on we are introduced to his first band, ‘Kilburn and the High Roads’, who are rehearsing at his home. Their session is ‘disrupted’ by the birth of his son upstairs. The film then takes us progressively through his career and chaotic life whilst throwing in flashbacks, animation and live performances along the way. It's all very well done.

His first band soon implodes but out of that he meets groupie Denise Roudette (Naomie Harris), who becomes his girlfriend, and Chaz Jankel (Tom Hughes). Jankel, a talent musician ten years younger than Dury, takes on the task of fashioning Dury's offbeat lyrics in to the songs that would make him fame as Ian Dury and The Blockheads. No much is actually said about their chart success, although we do get a demonstration of how quickly things can go awry once stardom is achieved. 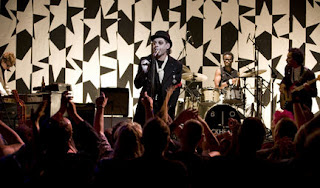 The film is much more interested in his complicated relationships which Dury struggles to reconcile with his music career. Dury and his father; Dury and his women (his long suffering wife and his girlfriend); Dury and his Son, Baxter (Bill Milner of Son of Rambow). Baxter appeared on the sleeve of 'New Boots And Panties' with his father. Re-enacted here. 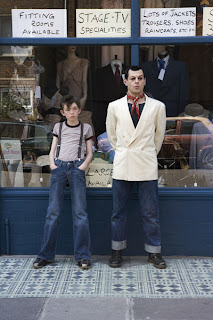 Dury is not a good role model for Baxter. Initially alienated by his father, he becomes increasingly in awe of his rebellious father and starts to mirror him and becomes a regular truant from school. In fact did he ever go? Baxter goes somewhat predictably off the rails.

Always the absent parent, Dury moves in with Denise and they live in a tower block in Vauxhall. A tower block that he calls ‘Catshit Mansions’. All the while he continues to do things in his own anarchic way, practising his well honed ability to rub people up the wrong way.

Then keen to give something back to people with disabilities like him, Dury records the notorious 'Spasticus Autisticus' as his contribution to 1982's United Nations Year of The Disabled. It is perhaps good intentioned but is subsequently banned and brings him into conflict with the Spastics Society who disagree with his assertion, passed down by his now late father, that people like him didn't want sympathy, they wanted respect.

Overall, it’s an excellent and playful film, just like its subject matter. Never sentimental although it had plenty of opportunities, had it wanted to be. Towards the end, as presumably Dury approached his own end, he died of cancer in 2000 at the age of just 57, he himself appears to regret nothing. ‘The only thing I've missed is a few buses’ he declares. 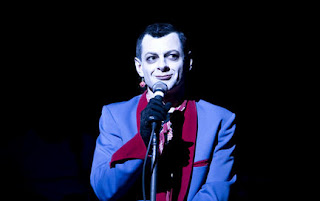 The end credits roll to Serkis’s rendition of ‘Reasons To Be Cheerful’. Good stuff.
Posted by FitForNothing at 4:00 PM