I get the honour of taking the boys out for a meander this morning. We meet a road sweeper which caused a bit of a yap from MD, ok a lot of a yap. So I made him walk past it quietly, well fairly quietly. Then I’m a bit miffed when a chap and his dog cross over the road to avoid us. Not sure if this was because Doggo was off lead or because of MD’s growing reputation.

My colleague has the biggest burger I’ve ever seen for his pub lunch today. I wouldn’t normally consider having a burger but even I regretted not having this. Two beef burgers, topped with cheese, salad, onion rings, couple of slices of bacon, all in a bun with a skewer running through it to hold it together. Not something, anybody, and I know some people with big mouths, could have bitten into without disassembling it first. It was about a foot high.

After work, I have half an hour with the dogs before cruising down Ilkeston Road to see what I can pick up, or more specifically L. Today sees the end of the usefulness of the phrase ‘You’ve got about as much chance as you have of talking me into Mika’, as here I am, about to accompany L up to the Sheffield Academy and an evening with the glittered one.

We eat our tea on the way up, not the Kit-Kat sandwiches promised by L, she’s had a hard day (and week), but cheese and ham instead. This time we save ourselves a fortune by shunning the official car park and parking in the street for free. We actually park by the Leadmill; I’m thinking that if we’re lucky there might even be a gig on there.... no joy, L frog marches me to the Academy.

She asks whether I would speak to her if she bought a t-shirt. Of course I would. Buying one is fine; wearing it though would be a different matter.

Support tonight is from a ginger Swede called Erik Hassle, who’s electro-pop-rock seems to have a bit of a 1980’s edge to it. All very pleasant in a ‘The Script’ sort of way, so nothing to get excited about either. Power pop but without much power, although he was fairly well received. He can sing I guess but his stuff was largely unmemorable. So he could be huge. Nice hair by the way Erik. 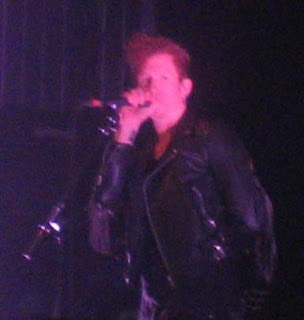 So... to Michael Holbrook Penniman. As they bring a table and chair out to the front of the stage, the rather large female behind me screams in my ear before quickly apologising and introducing herself to me, I think I’ve pulled, before she gets back to her screaming.

The atmosphere appears to be cross between what I would expect at a boy band gig and a hen party; I spot a feather boa and several sets of bunny ears. The predominately female crowd is supplemented with a few husbands and boyfriends, who have been dragged along, some seemingly willingly. The average age is worryingly high and makes me feel as if I’m one of the youngest here. Although I'm not because there are several children here, some even of primary school age. I have no idea how they got past the 14+ restriction and most of them haven't a hope of seeing anything.

Then as the lights go down, someone comes and sits at the table and starts drawing or sketching or something. Cue more screaming, mostly in my ear. Excuse me people. It’s is NOT Mika and I’m sure you know it’s not. It turns out to be the keyboard player. Not sure what all that was about but then the man himself wonders on stage with a suitcase (?) and launches into one of his better numbers ‘Rain’. We’re off and running on a multi-coloured trip through the strange kitsch world of Mika. 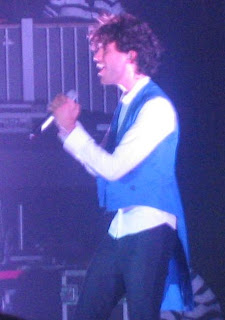 The second track, ‘Big Girl (You Are Beautiful)’ is dedicated to all the larger women and men in the audience of which there are more than a few. This is not, as you can tell, my usual night out at a gig. I’ve asked L several times what the attraction of Mika is and all she’ll says is ‘he's such a nice boy’. I’m a nice boy, won’t I do? And I don’t have a falsetto, or perhaps that’s the problem. She never really mentions his music and as for being a nice boy... is she sure? Because tonight folks, I’m sorry to tell you, Mr Nice Boy swears and utters the F-word, not once but twice.

So Michael 'treats' us to a selection of tracks from his two albums, plays keyboards on a few, but generally just dances and sings his way around the stage, rarely standing still long enough for me to get a photo of him. When he does stand still he is obscured by two women waving lollipops above their heads, right in camera shot. I’m tempted to go over to them and tell them where to shove said lollipops.

Mika’s music may not be my cup of tea, in fact the relentless high pitched-ness of it all starts to grate quite quickly but at least he’s entertaining. I guess this is also why people go see the likes of Robbie Williams. Some of the songs though... whether Sheffield or anywhere for that matter, is quite ready for such nuggets as 'Stuck in the Middle', I'm not sure, I'm certainly not but the crowd show I’m in the minority tonight. 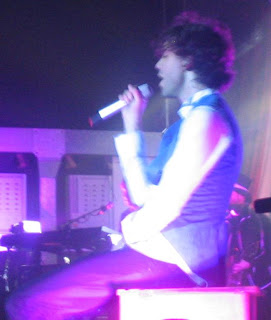 Then suddenly and unexpectedly, a moment of brilliance, a slowie called 'Any Other World'. Tonight it’s a more stripped down version to the one on the album and has been sawn of its orchestral effects. It sounds classy tonight, almost a Kleenex moment amongst too many bucket ones. I applaud but hold back from trying to out-scream my new friend behind me. Then normality is quickly restored with 'Blue Eyes'.

One of his crew, who for reasons known only to him, is dressed in something that resembles a convict’s uniform crossed with a romper suit chucks a bundle onto the stage. Mika unwraps it and it appears to be Hessian sacking with a few feathers attached to it. He puts it on and I wonder if he’s supposed to be a chicken as he performs 'Love Today'. 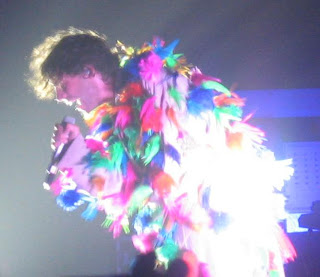 I’m glad to say we’re getting through it now, I’m ticking them off one by one and when ‘We Are Golden’ appears I know there is light at the end of this particular tunnel. This closes the set on a hallucinogenic ‘high’ accompanied by a shower of golden ticker tape from a couple of stage side cannons.

Our golden boy returns for an encore to sit at his piano with a puppet of himself and perform ‘Toy Boy’ before its number one hit time, ‘Grace Kelly’. I’d forgotten about that one.

Then the entire band come to the front of the stage and start belting the hell out of a load of steel dustbins which evolves into the song ‘Lollipop’ which in turn builds to a crescendo that is accompanied by more ticker tape from the cannons and huge inflatable balloons bobbing through the crowd, that brings back horrific memories of a night with the Hoosiers.

Then the day-glow partying comes to a close, it’s finally over and I’ve survived. I get a kiss from L and an offer of sexual favours all next week on holiday. I knew there was reason I agreed to this. 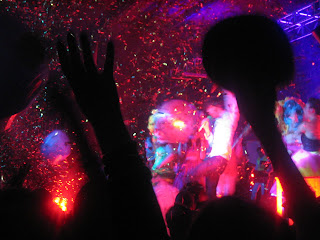